Someone who is interested in books and in people who will find satisfaction in bringing the two together.

That was the plea of the Board of Trustees in the local newspaper on January 28, 1921. They were seeking a librarian to manage the new library space on the second floor of the Lake Drive School from 2:30 to 5:00 pm daily, and one evening per week.

This, however, was not the first chapter in the story of the Mountain Lakes Public Library – a beloved fixture of the community for 100 years.

They say good things come in small packages and that’s especially true at the Mountain Lakes Library, where an exhibit of six miniature rooms by the late artist Edgar Craven is on permanent display. Created in 1940-41 and refurbished in 2017, these intricate treasures are a sight to behold and have been featured in Miniature Collector magazine. The exhibit was made possible by many volunteers who helped clean and refurbish the rooms in their original location, and then moved and reassembled them in the library, and by a donation from the Town Club of Mountain Lakes. 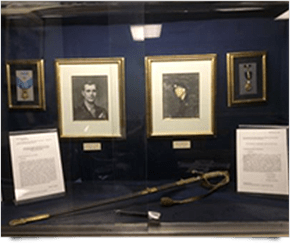 2,032 B-17 “Flying Fortresses” and 800 fighters in the Battle of the Bulge in Western Europe. His airplane fatally damaged, he ordered his crew to bail out while he remained at the controls, making their exit possible. He went down with the craft and lost his life in the crash. He was posthumously awarded the Congressional Medal of Honor, the nation’s highest award.

Admiral Browning, who after he retired lived at 178 Boulevard, was a senior naval officer in World War II responsible for Operations and War Plans in the Pacific. Later, he was Chief of Staff and Aide to Admiral (later Fleet Admiral) William F. Halsey, Jr., who at the time commanded the entire South Pacific operations. Admiral Browning developed the battle plan that led to the defeat of the Japanese Pacific Fleet in the Battle of Midway, a pivotal battle in the war in the Pacific. For his efforts, Admiral Browning was awarded the Distinguished Service Medal.

We're not around right now. But you can send us an email and we'll get back to you, asap.

This room is graced with intricately carved and quartered paneling, a fireplace, and a large bay window looking out on a winter landscape. On the walls hang three miniature replicas of paintings by the artists Hale, de Hoock, and Van Dyck. Three of the rooms (this, the Tudor Bedroom, and the City Drawing Room) are near duplicates of museum-quality miniatures created by Mrs. James Ward Thorne, whose works are on permanent display at the Art Institute of Chicago. Craven masterfully replicated the detailed oak paneling and deep bay window overlooking a painted garden.

Inspired by local Arizona architecture, the tiled patio is complete with gardens and trees surrounded by stucco walls, decorative grilled windows, a carved wood balcony, rattan furniture, and a panorama of the desert beyond.

Craven embellished this formal room with reeded pilasters, a mantel with recessed breast above, an architectural double doorway flanked by niches, and two arched windows opening to a balustrade balcony.

This high-ceilinged room features a large window that looks out onto a painted view of the city. At one end there’s a balcony with an intricately carved wood railing, and under the window is a low, two-tier bookcase, a studio easel, and a reproduction of Mrs. Craven’s grand piano.

Room #1 is a reproduction of Craven’s studio on his property at 135 Intervale Road in Mountain Lakes. The Arts and Crafts-style living room highlights the open-timbered ceiling and carved wooden mantel. A large set of French doors looks out on an arranged garden diorama.

Edgar M. Craven lived in Mountain Lakes and worked as a banker in New York City before retiring to his second career as an artist. He elevated miniature-making to an art form, creating settings of exquisite detail and character while using the scale of 1 inch to 1 foot.